Each year, scientists are working on ways to prevent drunk driving.  It’s a serious problem that has resulted in thousands of lives lost every year.  According to a report from ABC News, a major manufacturer of tortilla chips is making a limited edition bag of chips that can detect how much a person has had to drink and if they are safe to drive home from the party.  This is mainly for people who like to get together to watch live sporting events like the Super Bowl. 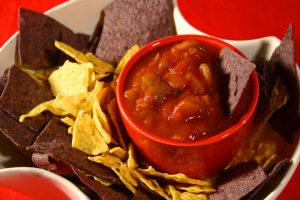 The bag, officially called a party safe bag, contains a sensor and a micro-controller that is said to be capable to detect if a person has been drinking.  The way the technology works is that it is supposed to be able to determine from a person’s breath if that person had been drinking an alcoholic beverage. If the bag detects that that person had been drinking alcohol, the logo on the bag will display a red steering wheel.  If he person is clear to drive, it will display a green circle.Once a red steering wheel is displayed, the user can then hold his or her cell phone up to the bag and it will activate the Uber app and call for a ride, as this is a popular ride sharing service most people have on their smart phones these days. The company does not say if detects whether any person is above the legal limit to drive, which is 0.08 grams of ethanol per hundred milliliters of alcohol in the Commonwealth of Massachusetts.

It is more likely that the so-called party safe bag is designed to simply detect whether there is any alcohol on a person’s breath and tell them that it is probably not safe to drive.  This brings up a good point that you can discus with your Boston drunk driving accident lawyer. The fact that a person may be below the legal limit of 0.08 does mean it is safe for them to drive a car.  The reason for this is because there is a difference between what is known as the per se intoxication level and whether a person is engaging in negligent behavior by driving after the consumption of a certain level of alcohol.

The standard in a personal injury negligence case, which is typically the basis for filing a lawsuit related to a drunk driving car accident, is whether the person acted as a reasonable and prudent person in the same or similar situation so as to prevent foreseeable injury to foreseeable persons and property. If a person has a beer and a half in a half hour and then gets behind the wheel of a car, it is possible, depending on the person’s weight, that the person will have a blood alcohol content (BAC) below the legal limit.  However, it is likely that the driver will not be able to safety operate a car, and this may result in an accident.  Under these facts, a jury could find in favor of the plaintiff, notwithstanding the fact that he or she was under the legal limit.