There is no question that drinking to the point of intoxication and driving is dangerous.  It is also illegal.  There are a variety of reasons why it is dangerous to drive while drunk. On the one hand, it can affect your ability to physically operate a motor vehicle safely.  Those who are drunk have impaired motor functions, for one.  This means it is physically difficult to operate the controls in a coordinated manner. 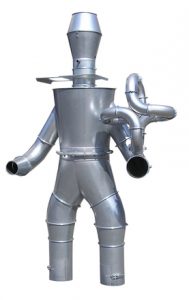 In addition to loss of gross and fine motor skills, drinking to point of intoxication can cause blurred vision, making it difficult to see clearly and accurately judge distance. This also makes it dangerous to operate a car.  In terms of mental acuity, when a person is intoxicated, they will have difficulty processing information quickly and reacting to ever-changing stimuli we all face when driving a car in traffic.

One might wonder what someone must be thinking to take the risk and drive drunk. For one man recently arrested for DUI while dressed as the Tin Man from “Wizard of Oz,” it may have been, “If I only had a brain.”

According to a recent news article from Inside Edition, the man was in full costume, complete with metal hat and face paint, because he had been at an event earlier in the day where he was paid to dress in character.  It was a costume contest for a local business.

Police alleged that defendant drove to another man’s home while intoxicated and refused to vacate when asked to so.  The homeowner called the police, and the man was charged with drunk driving.  He allegedly blew a breath test result of 0.19 grams of ethanol per hundred milliliters of blood, which is more than two times the legal limit of 0.08.  It should be noted that he has not been convicted, as he has only been alleged to have committed a crime.

The fact that something is also illegal may have an effect on the outcome of the case in terms of proving negligence. There is a legal doctrine known as negligence per se that states that if something is illegal, it can be used to establish negligence.  However, unlike other jurisdictions, Massachusetts law, as held in Falvey v. Hamelburg (1964), requires that the harm the law is aimed at preventing be related to the injury suffered. In that case, the court held that it was proof of negligence in a car accident because the defendant was driving an unregistered car.  The reason for this is because the unregistered car was not solely created to prevent car crashes.  However, the court did say it could be used as evidence of negligence. In the case of a drunk driving car accidents in Boston, however, the drunk driving law was established to prevent serious or fatal car accidents, so it would fair much better as proof at trial.

In addition to the doctrine of negligence per se, drinking causes people to have poor judgment, and that in turn can be used to prove negligence. Negligence, as we have discussed in other blog posts, basically comes down to failing to act as a reasonable and prudent person so as to avoid a foreseeable injury to foreseeable persons and property.  This doesn’t mean being perfect, but it does mean using good judgment, and that is something intoxicated people don’t often do.

Man Dressed as Tin Man From ‘Wizard of Oz’ Charged With Drunk Driving, June 7, 2017, by Maya Chung, Inside Edition